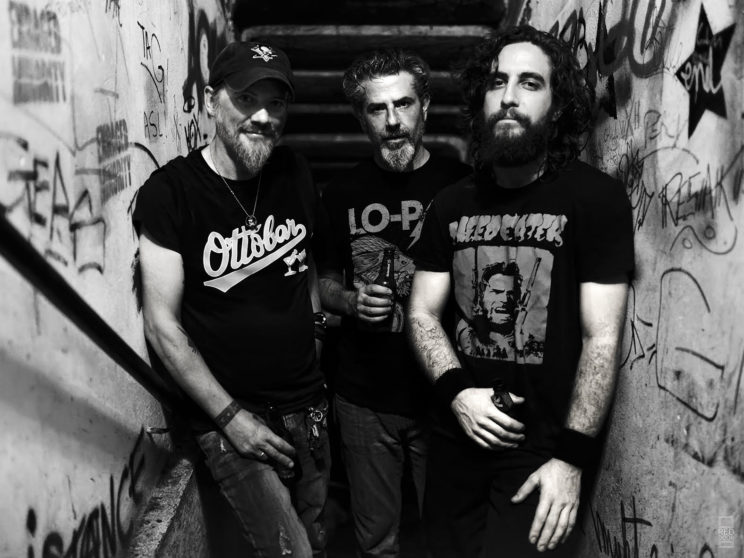 To explain what’s so special about this American rock trio to somebody who’s never heard of Karma To Burn before, you have to start by leaving aside some of the basic principles of that music and start with the group’s most obvious forte: their riff-driven, heavily grooving instrumental songs blend almost the entire history of rock music, from the late sixties with their euphoric atmosphere of departure to the present return to handmade, organic music which counteracts with passionate spiritedness the general trend towards cold digital sounds. Even without vocals, Karma To Burn fascinate their listeners from the first to the very last note. “If you want to compose a song without vocals, you have to really concentrate on the continuous flow of the arrangements, after all we don’t have a singer to cover up any weak passages,” explains guitarist William Mecum, who makes up Karma To Burn’s current line-up together with Evan Devine (drums) and new addition Eric von Clutter (bass). “An instrumental track has to be like a rollercoaster ride that takes its audience up and down the whole time to maintain the suspense and dynamics. It’s got to be able to impress all the way.” 26 February 2016 will see the arrival of the group’s new EP Mountain Czar on Rodeostar/SPV, and the recording is set to fulfil those very criteria. So their fans may already look forward to five new tracks and the subsequent tour, scheduled to start directly after the release.

The new material will be presented to the public for the first time at those shows. On the one hand, Mountain Czar features the same artistic DNA as all recordings by Karma To Burn since their 1997 debut, on the other hand it also holds a number of surprises. As usual, four of the five songs feature numbers instead of regular song titles, namely ´Sixty`, ´Sixty One`, ´Sixty Two` and ´Sixty Three`. This way of naming their songs is just as much part of Karma To Burn’s approach as their holding on to established sounds and structures. “Of course we want to make sure that our music gets more interesting all the time, but only in the context of our own history and only to an extent that doesn’t confuse our fans,” explains Mecum. One of the exceptional moments on Mountain Czar is ´Sixty Three`, which the band refer to as “a heavy rock song with a mix of Western style and the surf rock feel of the 1950s”. Then there’s ´Uccidendo Un Sogno`, a cover track featuring a female (!) vocalist (!!) and Italian (!!!) lyrics. By way of explanation: Karma To Burn took ´Runnin Down A Dream` by Tom Petty & The Heartbreakers and asked Italian singer Stefanie Savy to record it in her native tongue. And on top of that, the end of the song surprises with a solo by Sons Of Morpheus guitarist Manuel Bissing.

The album title may also require a brief explanation because Mountain Czar, freely translated “Ruler of the Mountains”, is a reference to the band’s (future) stylistic direction. “Our music is sometimes referred to as stoner rock, but when we started the band none of us really smoked marijuana. Sometimes out style is called desert rock, although we don’t come from the desert. We’re from West Virginia, which is also called ´The Mountain State`,” Mecum smirks. “So it practically suggested itself to look for a term which really suits our music. That’s why we decided on the title Mountain Czar, in the hope that people would label our music as ‘mountain rock’ in future.”

There’s no indication that things are about to slow down for this band – what with their spring 2016 tour coming up, which has already been confirmed. So no signs of fatigue in the Karma To Burn camp. “More than 20 years ago, people told me that a purely instrumental band could never work in the long run,” William Mecum recalls. “But Karma To Burn are like a boxer with a big heart, amazing stamina and a talent for getting back on his feet again and again.” Which is just as well, seeing that in this case there’s a mountain to be conquered.